There are many caregivers who provide care to persons who at first glance may not appear to need a caregiver. To whom are they providing care?  These caregivers take care of those suffering from an "invisible" condition called Post Traumatic Stress Disorder (PTSD).  PTSD is a mental health condition that develops as result of seeing or experiencing a terrifying, shocking, or dangerous event that caused or had the potential to cause serious physical harm.  It has received recent national attention due to the large number of soldiers returning from Iraq and Afghanistan who have been diagnosed with PTSD.  In response to the large number of Americans affected by this condition, June has been designated as National PTSD Awareness Month.

Whether its cause lies in war or some other traumatic event, the symptoms of this condition are the same.

One of the main symptoms of PTSD and the one that makes it hardest to recover from is reliving.  The person relives the event through flashbacks, hallucinations, and nightmares.

Avoidance is a second symptom.  The person avoids anyone and anything that reminds him or her of the traumatic event.  Someone who was once outgoing and sociable may become withdrawn and isolated.

Hypervigilance is a third result of PTSD.  This involves the person constantly being "on guard", always looking around for a perceived threat.

Those with PTSD also often have a change in their emotional state.  This may show up as problems relating well to others, trouble giving and/or receiving affection, irritability, and angry outbursts.

Treatment for Post Traumatic Stress Disorder can take the form of counseling, medication, or a combination of the two. 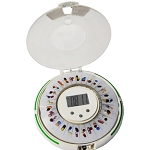