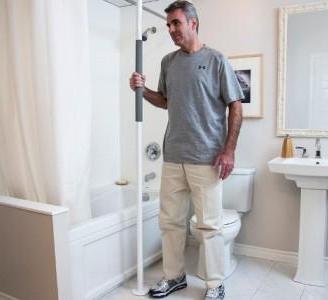 The issue concerns assistance with bathing and toilet functions. The person you are caring for--a patient, a spouse, a mother, or father--honestly would rather take care of bathing and toilet tasks independently. You--the caregiver--would rather be taking care of other needs. But it is an issue because too often there is a gap between what the person can do and what the person wants to do.

You can narrow that gap, or even close it, by taking advantage of assistive bathing aids and toiletry aids. The trick is to give the person the tools to do these things by oneself.

Start with the most sensitive area: the toilet. This is universally the one place where people wish to have privacy. You can provide that privacy by first identifying needs. How do you identify needs? By asking.

Easier said than done, right? At some point, the desire to talk about these issues becomes greater than the potential embarrassment. As the caregiver, you should be intimately aware of the person's needs--but you still must elicit a response from them. It's as simple as saying, "You know, there are toilet tissue aids. They help you hold the tissue yourself. Then I wouldn't have to be in there with you."

If the topic feels too weighty, inject a little humor: "Then you could read your magazine as long as you want, right? You wouldn't have me rushing you along!"

Much of the problem stems from one simple fact: they may not even know about these assistive devices. How is it possible to ask for a tissue tongs or commode pads (soft polymer seat cushions) if one has never even heard of them?

Try to present questions with simple, multiple-choice answers, rather than asking them open-ended questions. Don't say, "How can I make it so you can take a shower alone?" Rather ask, "I've seen some nice shower seats advertised that let you take a shower all alone. I would have to get you in and out, but you could enjoy the shower by yourself. Would you like me to look into it or would you rather not pursue it?"

Once they try out and begin to enjoy some of these assistive devices, they may want to go a bit further. You can encourage this. For example, the person who learns to take a shower on a seat may become more confident to use a grab bar to get in and out of the shower--thus becoming fully independent.

Since most folks who need toilet or bathing assistance are sensitive to the feelings of their caregivers, they may feel that it is too much of a bother to you to look into the issue, or they may fear that the cost is too much. However, you can assure them that you would enjoy the assistive device, too. If they ask, you might say, "Because while you are showering, it would give me a chance to straighten up your room and perhaps rest my feet for a few minutes."

Communication and education--and keeping a sense of humor--are the keys to approaching sensitive toiletry and bathing issues with people you are caring for.